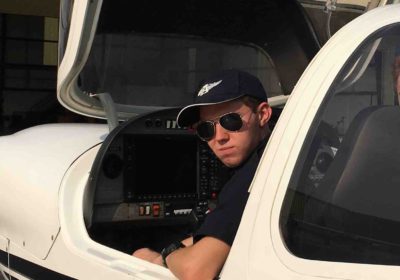 Typically, your UTF will be the guy (or gal) that grades your papers, takes attendance, and maybe uses a vacuum hose to shoot things in your physics class.

In aviation, your UTF is captain of the university’s flight competition team.

This year’s captain of the team is Alex LaBarge. A junior who was born in Panama, his job is to prep his fellow pilots for the NIFA SAFECON regional competition in October.

“It’s a collegiate competition that’s held every year. It involves basically precision, calculations with flying as well as precision flying itself,” LaBarge said. “My job as the team’s captain is to train and to motivate and just basically be in charge of leading the team to a successful competition.”

LaBarge said that his position gives him an opportunity to explain the things he’s learned, as well as “pre-conditioning” him to take the certified flight instructor course his senior year.

What got Alex LaBarge flying in the first place? his father worked for the military and the family was stationed around the world as a result. However, his father’s work usually confined him to a desk.

“I could not have an office job, I just can’t do that,” LaBarge said.

With already 170 hours of time in the cockpit, LaBarge’s career goal is to fly for an airline. In the meanwhile, you can see LaBarge driving the Aggie Shuttle: a job that holds some similarities to flying, according to LaBarge. 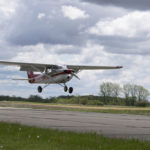 Like airplanes, routine check-ups are required before a bus is deemed worthy to take passengers. Responsibility and awareness are also a top priority. Thus, with these two experiences, LaBarge wants to make a “positive impact” in his field of aviation.

And, aside from prioritizing care for the aircraft and general safety, LaBarge brings with him a passion to fly. For LaBarge, being in the sky gives him motivation to become the best he can be, adding to it a sense of adventure.

It’s never the same story,” LaBarge said. “It’s a joy every time. I love it every time.”